‹ back to previous page

7 Celebs Famous for Their Glasses 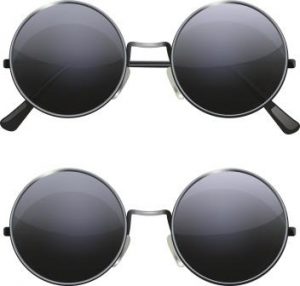 Discouraged about having to wear glasses? You’re not alone. With many adults and children alike needing to wear glasses, you are bound to need a pair at some point in your life. But don’t be discouraged. Many prominent celebrities, politicians, musicians, and more have all sported them, and in the below cases, made eyeglasses part of their image.

The activist was world-renowned for his philosophy of nonviolent protests and civil disobedience while living in India under British rule. He was also nominated for a Nobel Peace Prize five times between 1937 and 1948. His simple, round frames are one of the most recognizable parts of his image.

He may have become famous for the mop top, but when John Lennon left The Beatles and headed into the world of solo artistry and attempts to connect people on a deeper level, his perfect-circle glasses became part of that as well. Even though iconized 40 years ago, the glasses remain a popular choice.

These women tie up the spot for both rocking lenses and for being known for them. When Sarah Palin became the Republican Vice Presidential Nominee in 2008, who knew that her trademark Kazuo Kawasaki lenses would be the hottest new thing? The rectangular frameless lenses were and remain a trademark. Tina Fey, star of SNL and “30 Rock,” is also one of the best known Palin spoofers. However, her rounded horn-rimmed frames are also a trademark all her own.

Also known as Paul David Hewson, the front man for the band U2 is rarely seen without his rectangular, rose shades. Along with his music, Bono is also a well-known philanthropist which has earned him several prestigious titles including Time Person of the Year 2005, Commandeur of the French Ordre des Arts et des Lettres, and Knighthood. An interesting note is that he wears the glasses due to a unique eye sensitivity.

The New York filmmaker would hardly be recognizable without his trademark black rims. The director hit the big time with his 1977 hit “Annie Hall.” There has been scandal and accusations throughout his extensive career, but he is to be congratulated for turning 80 next year and still making films.

He wasn’t the first nerd to wear glasses, but he was the only one to do it so well, he landed a reoccurring –and ultimately – starring role on “Family Matters,” a gig that was only supposed to last for one episode. Yes, Steve was dorky, wore pants to his armpits, and pointed in the air when he danced, but he owned all of it, even the glasses.

The director is famous for such films as “Edward Scissorhands” and “Beetlejuice.” He has also been nominated and won many prestigious awards including the Emmy, Golden Globe, and Academy Awards. He is also rarely seen without a trademarked pair of tinted glasses.

And if you live in the Bellaire or Houston area and need eyeglasses or contacts, feel free to contact us.